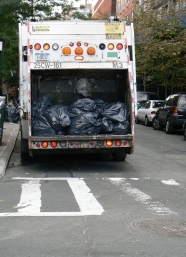 The garbage truck speeds up and I begin to run. I race down the sidewalk of the Lower East Side weaving through pedestrians . I’m stopped by a light, cars zoom by in front of me and the thundering truck turns left a block away from where I am standing. I should have known they were trying to lose me after the driver flashed me a sardonic smile and waved. I just didn’t think he’d slam on the gas pedal so forcefully.

I’m trying to follow the trail of trash by foot, train and taxi — from the moment New York City Department of Sanitation workers pick up the garbage on the curb outside of my apartment until it reaches its final destination, the Covanta Essex Facility in Newark, New Jersey. There it will be stuffed into a boiler and used to fuel the production of electricity.

My journey started around 7:40 a.m. when a garbage truck rumbled by. Johnny, a thin fellow with a thick, brown mustache, gets out of the white Department of Sanitation vehicle and starts hauling the plump, black garbage bags over his shoulder to the truck. When I tell him I plan to follow the truck on foot, he seems relieved to have some company. He’s been doing this for over 20 years.

“It’s tough on Wednesdays, because of route extensions,” Johnny confides. “They give us more work on Wednesdays.”

As he’s speaking to me, a stern-looking man sporting a Department of Sanitation badge, approaches. Jack Pisano, who supervises the workers, brusquely informs me that I can follow the truck, but the workers aren’t allowed to answer any questions. It’s department policy, he tells me.

Johnny and Steve, (who’s names have been changed) sanitation partners of several years, are part of the city’s 7,899 uniformed sanitation workers. Their department hauls, on average, about 12,000 tons of trash and recyclables a day, making it the largest sanitation operation in the world, according to their website. The pair alone haul about 13 tons a day, during their eight-hour shift, which begins promptly at 6 a.m and ends at 2p.m.., five or six days a week.

The city only picks up residential trash, which includes garbage from non-profits and churches. Paper, placed in clear plastic bags, and cans and bottles, encased in see-through blue bags, are picked up by two separate city sanitation trucks and taken to recycling facilities in New York and New Jersey. Commercial waste is collected by private companies.

Steve wears only a department of sanitation t-shirt and thick, protective gloves in 40-degree weather. He drives the truck while Johnny tosses the bags inside. When they come upon bigger curbside loads, Steve leaves the truck and runs outside to help Johnny, making the work seem quick and effortless. A few of the bags leave murky, mini-estuaries flowing down the pavement, which the men don’t seem to notice.

Johnny and Steve can’t smell it anymore. “It smells like a dead rat sometimes,” Johnny says. “Garbage is garbage. I’m probably immune to it.”

Johnny swears he and Steve haven’t developed any back problems associated with heavy lifting. He assures me that he and Steve are in tip-top shape. But then he admits, “I got to go home and take Tylenol when I get out of here,” said Johnny. “It’s a hard job physically. Everyone thinks it’s easy, but it’s not. If you’re not in shape and physically fit you won’t be able to do this job.”

The truck turns a corner and comes across a double-parked car. The partners start grumbling. When I ask them what they like most about their job, Steve mumbles something sarcastic about working with the public and gets back into the truck. Johnny looks at me and grins. “The best part of this job is pay day,” said Johnny.

Pisano reappears and the interview ends abruptly. He tells me I cannot speak with the workers. Then he pulls them aside and whispers something. Johnny returns apologetically. “I can’t talk to you,” he says with his eyes cast to the ground. “If I talk to you, I get a fine.”

I follow the truck in silence for another two blocks, before they drive away and I’m left on the sidewalk squinting into the distance. Pisano has told me the truck is behind schedule and will be going back to a garage today on South Street when Johnny and Steve’s shift ends. Usually the workers drive it directly to Covanta Energy’s waste-to-energy facility in Newark, New Jersey. This afternoon, the following shift of workers will make the delivery.

New York City trash used to be dumped in Fresh Kills, a landfill on Staten Island. But when the city closed the landfill in 2001, due to environmental and health concerns, all the trash from the five boroughs was hauled out of the city, to 52 private sites across the country.

“Right now all of our waste leaves the state, which of course is an absurd situation,” says Benjamin Miller, an environmental policy specialist and New York City trash expert. “We are completely at the mercy of a handful of multinational waste management companies that can charge whatever they want.”

Garbage disposal now costs the city $85 for each ton of waste, according to Dennis Diggins, a former Fresh Kills director and current Deputy Director at the Bureau of Waste Disposal. That averages out to approximately $1,020,000 per day. Miller says that outsourcing the city’s garbage disposal is about a million dollars a day more expensive than it was to dump at Fresh Kills .

Most of New York’s trash is trucked to New Jersey and Pennsylvania. Some of it goes all the way to Ohio and Virginia — and even as far as a small town called Bishopville in South Carolina. Almost all of Manhattan’s residential waste and some of its commercial garbage winds up closer to home, at the Covanta Essex Facility administered by the Port Authority of New York and New Jersey.

The plant, which began commercial operations in 1991, uses household waste to produce energy. The facility reminds me of an Easter egg: Its buildings, painted in bright pink and blue, bulge up from the flat land of industrial Newark. About 985,000 tons of trash from New York and New Jersey, excluding medical and construction waste, are burned there each year.

Hank Asher, the congenial business manager of the plant and my tour guide for the afternoon, is waiting for me in a sports coat outside. Asher starts my tour at the plant’s “tipping floor.” The floor is basically a garage where sanitation trucks dump bags of garbage that are pushed into a holding facility where they are inspected. I watch as a New York sanitation trucks dumps tons and tons of mushy trash bags. The facility reeks of acrid, rotting eggs.

From the holding facility, the garbage is fed into a boiler heated to about 2000 degrees. Asher takes me into the administrative facility and hands me a hard hat and a pair of goggles he’s retrieved from a file cabinet. Then we visit a boiler, which has water continually pumped inside of it. When the garbage combusts and burns, it turns the water into steam. The steam is then fed into turbines, which spin under the pressure of the steam to generate green electricity used throughout the Northeast. The plant produces about 500,000 megawatts of electricity every year.

The boiler reduces the volume of the garbage by about 90 percent and turns it into ash, which is later dumped in New Jersey and Pennsylvania landfills. The steam is cleaned and cooled into water.

After my tour, Asher gives me a ride to the Newark train station. I have followed the trash from the gloved hands of the sanitation workers hauling bags of someone’s rotting food into a garbage truck, to the Newark facility where those same slimy bags of inner-city waste are used to create energy. I have come full-circle.

“When a lot of these plants got built, there was a landfill crisis,” said Asher. “Municipalities had to find a way to dispose of their solid waste. Now people are looking for ways to generate more power in a green way. Municipal solid waste is one of them.”

One response to “Stalking Garbage”